Welcome to the tropical paradise of Phuket Island Thailand

Scuba Diving Phuket – Phuket Island Thailand is truly a tropical wonderland and offers something for just about everyone. Spectacular scenery, stunning tropical sunsets and warm blue sea awaits you at Asia’s most popular holiday destination.

Located 867 kilometers south of Bangkok, Phuket is Thailand’s largest island, shaped like an irregular pearl and measuring approximately 21 kilometers long. Connected to the mainland by a causeway, it has a coastline fringed with white sandy beaches and quiet coves, bathed by the clear blue waters of the Andaman Sea and set against a backdrop of green hills, coconut groves and rubber plantations.

Phuket Island formerly derived its wealth from tin and rubber, and has a rich and colorful history. The island was on one of the major trading routes between India and China, and was frequently mentioned in foreign ships’ logs. The Portuguese, Dutch, English and French came to trade during that time.

Blessed by nature and the smiling hospitality of its people, and supported by superb tourism facilities, Phuket is today one of the world’s premier tropical resorts. Palm-fringed beaches, an island-studded sea, superb accommodation, delicious seafood, numerous sporting and leisure opportunities to conclude the perfect recipe for a memorable holiday.

Phuket has two major seasons: the rainy season from May through October, and the summer from November through April. There are many sunny days throughout the rainy season: showers customarily last little more than 2 or 3 hours. September is the wettest month. The best months are November through February. Average temperatures range between 26°C and 34°C degrees Celsius (78°F and 93°F).

Getting around Phuket Island 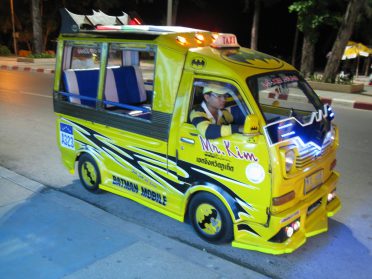 The island’s tuk-tuks at present are a lot more expensive than Bangkok’s three-wheeled icons and are not inclined to bargain flexibly – we recommend you to avoid them or be sure to ask the price first. The price for a simple run of 10-15 minutes is 200 Baht.

The motorcycle Taxi are not the safest way to travel but they are a convenient option for short trips. You will see them on street corners all over Phuket. The drivers wear red or green vests. Agree the price before you start the journey. Short trips around town should cost 40-50 baht.

Travellers arriving at Phuket Airport have a choice between the airport bus, metered taxis, minivans or. Once settled into their hotels, many visitors find it cheaper and more convenient to rent their own vehicle. Motorbikes start at 150-250 baht a day for the basic models while car rentals start at around 1,000 baht a day.

Phuket’s glory is its magnificent coastline. Tropical beaches ranges from gentle crescents of white sand to rocky headlands. Counterclockwise, from the island’s northern tip, where the Sarasin Bridge connects with the mainland, the major beaches and bays are: 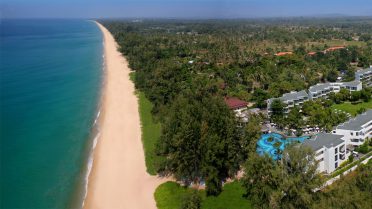 Hat Mai Khao
This pine-fringed stretch of sand is Phuket’s longest beach. Each year, from November through to February, giant sea turtles struggle ashore to lay their eggs here.

Hat Nai Yang
This forms part of the Sirinat National Park and is backed by casuarina pines, as well as a mangrove forest. The tranquil surroundings are ideal for relaxation, picnics, swimming and snorkelling.

Hat Kamala
Another fine stretch of sand. The northern end, which is partly shaded by casuarinas, is suitable for swimming.

Hat Patong
Phuket’s most developed beach offers numerous leisure, sporting, shopping and recreational options along its 3 km. crescent bay. In addition to its daytime attractions, Patong is also known for its vibrant nightlife among which seafood restaurants prominently feature. 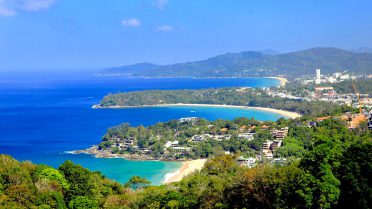 Hat Nai Han
This white sandy beach fronts a shallow lagoon between rocky headlands. Conditions for swimming, windsurfing, sailing and sunbathing are all excellent. Hat Rawai The palm-fringed beach is best known for its village of “Sea Gypsies”, formerly a nomadic fishing minority believed to be of Melanesian descent.

Ao Chalong
A location popular for its several restaurants serving some of Phuket’s best seafood.

Laem Phanwa
The southern tip of the cape is the location of the Marine Biological Research Centre and Phuket’s Aquarium, where visitors can see several hundred exotic and colourful marine species.

Ko Si Re
The small island separated from the mainland only by the Tha Chin Canal, is located 4 km. northeast of the town. There is a sea gypsy village considered the largest in Phuket. 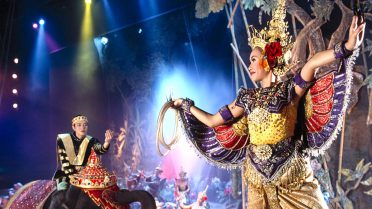 Phuket Fantasea
Inspired by Thailand’s rich and exotic heritage, Phuket Fantasea not only showcases the charm and beauty of Thailand, but also enriches ancient Thai traditions with the wonder of cutting edge technology and special effects. The result is a stunning 140-acre theme complex packed with a multitude of activities and entertainment: a festival village with carnivals, games, handicrafts and shopping.

A 4,000 seat restaurant offering a grand buffet of Thai and international cuisine, a breath-taking Las Vegas-style theatrical show, where state-of-the-art technology and special effects enhance the beauty of Thailand’s myths, mysteries and magic in a wondrous extravaganza certain to delight everyone.

Wat Phra Thong
Inland from Hat Nai Yang, the temple enshrines a famous, partially buried Buddha image. Local legend relates how a boy tethered his buffalo to what he thought was a post sticking out of the ground. Subsequently, this boy and his animal fell mysteriously ill. Suspicious villagers uncovered the post and found that it was the decorative topknot of a buried golden Buddha. They were able to unearth no more than the upper part of the image, over which the present temple was constructed. When Burmese invaders attempted to remove the statue in the 18th century they were attacked by a swarm of hornets.

Wat Chalong
This is where stands the cast statue of Luangpho Chaem, who helped the people of Phuket put down the Angyee or Chinese Coolie Rebellion in 1876 during the reign of King Rama V. There are also statues of Luangpho Chuang, and Luangpho Chaem, abbots of the temple during later times. To get there : Wat Chalong is about 8 kilometres outside town. Take Wichit Songkhram Road to the bypass and turn left, and drive for about 10 minutes. Wat Chalong is on the left. 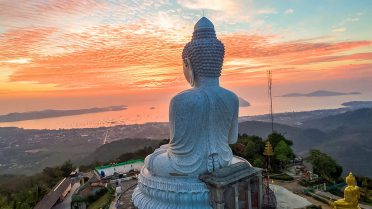 Big Buddha
Phuket’s Big Buddha is one of the island’s most important and revered landmarks. The huge image sits on top of the Nakkerd Hills between Chalong and Kata and at 45 metres high it is easily seen from far away. The lofty site offers the best 360-degree views of the island (think sweeping vistas of Phuket Town, Kata, Karon beaches, Chalong Bay, and more.) Easily reachable via a six-kilometer road leading from Phuket’s main artery, it’s a must-visit island destination.

Simon Cabaret
This is a spectacular display of originality and fun by an all-transvestite cast. Patong’s Simon Cabaret is one of Southeast Asia’s outstanding entertainment attractions. A single show runs the entire range of musical theatre from cultures around the world. Okay, so it’s not Las Vegas but for many it’s the first time they’ve been up close and personal with a ‘ladyboy’ or katoey as they’re known locally. Please note that performers are renowned for collaring members of the audience after the show, posing for a photo with them and demanding money for it. 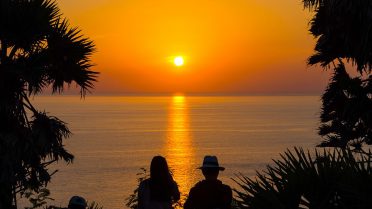 Phromthep Cape
A famous location in Phuket as well as the most photographed for tourists to see the spectacular view of the Andaman Sea and the sunset. A destination that should not be missed!

Phuket Zoo
A fun place to see a large collection of more than 600 species of birds, 100 species of reptiles and amphibians, and 45 species of mammals. Crocodile wrestling performances and elephant & monkey shows occur throughout the day, and elephant rides are bound to amuse the kids.

Khao Phra Thaeo National Park
Located in the north of Phuket, this park contains the only remaining virgin rain-forest on the island. The park trails offer visitors a chance to explore and to enjoy the sights and sounds of the jungle. Watch out for the beautiful waterfalls and the gibbon rehabilitation center.

Thai Village and Orchid Farm
This is located on Thep Krasattri Road about 3 kilometers from town, serves daily a typical southern Thai lunch that is followed by a spectacular cultural show including Thai dances, Thai boxing southern customs and elephants.
Handicrafts are also on display. The complex also houses a dining hall decorated with over 20,000 varieties of orchid and tropical trees. Digestion is aided by the lilting sounds of Thai classical and folk music played on traditional instruments.

And many more places…

There is an hourly and inexpensive bus service to Phuket Town from 06:30 to 21:30 but none to the west coast. You can buy tickets at a counter on the ground floor and the grey-red-and-black buses marked AIRPORT BUS are to be found outside in the parking lot.
Tickets for minivans are for sale at two counters on the ground floor. Minivans take longer than a taxi to deliver you to your hotel as they drop off other passengers at hotels along the way. A well-signed taxi stand is located just outside, to the right of the main building.
The taxis are red and yellow and are supposed to use their meters but you will probably have to insist that the driver turns his meter on instead of bargaining and haggling for a price. There are also two car rental counters where you can hire cars from Avis, Alamo, National and Hertz. Please make sure to take along your passport and driving license. Many more companies are located just outside the airport.

No extra charge for PayPal and/or Credit Card payments